In 1675, Joseph Parrocel (1646-1704) was asked by Louvois to paint the murals for the north-western dining hall of the Invalides. The pictures were devoted to campaigns in the Franco-Dutch War (1672-1678). Large-scale renovation work was carried out on the paintings in 2005 for the reopening of the Royal Room at the Musée de l’Armée. One of the paintings shows the Battle of Cassel and how Louis XIV saw his role at the head of the army. 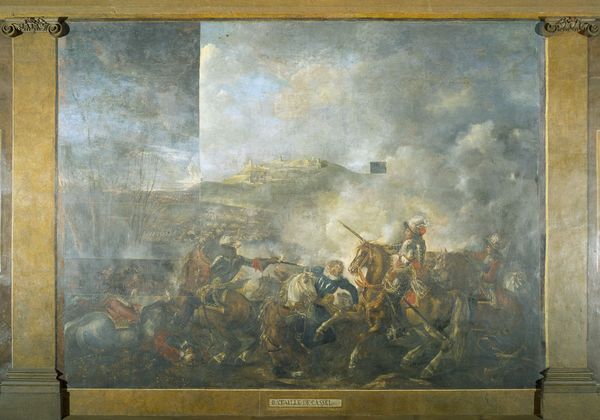 On 11 April 1677, in Cassel near Saint-Omer, the French troops inflicted a crushing defeat on the Dutch. The French were commanded by Louis XIV's brother, Philippe d'Orléans, known as Monsieur.

During the battle, Philippe, who was generally known for his effeminacy and total lack of toughness, bravely charged the enemy and turned the threat of defeat into total victory.

At the centre of the painting, the combat between two officers on horseback highlights the violence of the battle.

Monsieur, whose glory could not be allowed to overshadow Louis XIV, is slightly in the background on the right. He is dressed in red, the colour of the House of Orléans.

Although not actually present on the battlefield, Louis XIV is shown in the foreground. He is wearing a hat with a white plume. Parrocel's aim was to show that the king was the real head of the army.

Techniques : Oil on stone and plaster

History : 1680, commissioned for the north-western dining hall of the Hôtel des Invalides