The history of cryptography (literally "hidden writing") dates back to Antiquity. In the 5th century BC, Aeneas Tacticus drew up a list of methods used in cryptography in chapter 31 of his work, Poliorcetica. Over the centuries, the procedures became more complex. Cryptography boomed during the Great War. Just after the war, the German engineer Scherbius developed and marketed a commercial version of the Enigma machine, before it was adopted by the German army.

The Enigma was a portable electro-mechanical device using rotors (3 for the army, 4 for the navy) to encrypt and decipher messages. During the Second World War, the British mathematician Turing and his colleagues took up the work of the Polish mathematicians Rejewski, Różycki and Zygalski, who had managed to decipher messages sent by the Enigma using an electro-mechanical device nicknamed the "Rejewski bomb".

The men working at Bletchley Park, the headquarters of the secret cyphering service (codename Ultra), particularly focused on the naval version of the Enigma machine because of big losses to shipping in the Atlantic. Thanks to the Royal Navy's capture of a U-110 submarine with, even more importantly, an Enigma machine and all its codes, on 9 May 1941, the Allies were able to divert transatlantic convoys from U-Boat patrol zones. After the launch of an Enigma with 4 rotors in 1942, messages sent between German submarines once more became indecipherable. But the allied cryptanalysts later managed to decipher messages from the new device. 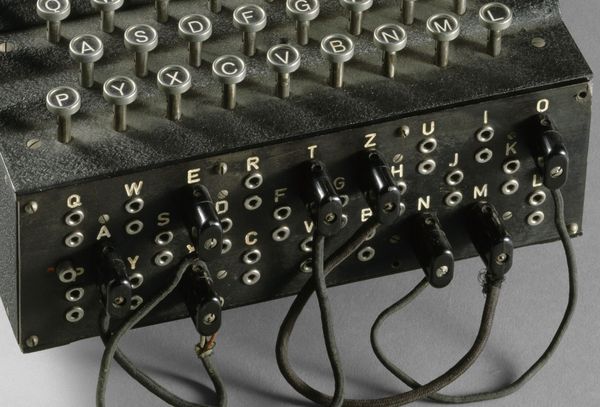 History : Deposited by the Transmissions Unit (1999)