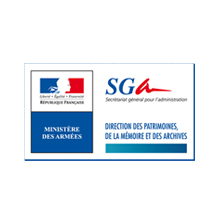 Under the authority of the SGA (General Secretariat for the Administration) of the Armed Forces Ministry, the DMPA (Heritage, Remembrance and Archives Department) has three main areas of expertise: property and the environment, cultural, educational and remembrance policy, archives and librairies.

Ministry of Culture and Communication

The "Musée de France" (Museum of France) label was created by a museums law dated 4 January 2002. The Musée de l’Armée has been given the label, a sign of the recognition by the Ministry of Culture of the special interest of the museum's collections "regarding the knowledge, education and enjoyment of the public".

To be awarded this prestigious label – a guarantee of quality and high standards – the museum has to respect specific criteria:

The fields of expertise of the Diplomatic Archives and of the Musée de l’Armée are naturally complementary. Negotiation records, showing how agreements and treaties were reached, are at the heart of foreign affairs. The exhibition In the East, War without End. 1918-1923 perfectly matches the Diplomatic Archive department's aim of bringing some of its most prestigious elements to wider notice as part of this ambitious exhibition, which is guaranteed high public visibility during the Centenary, through loans of exceptional documents and large-scale maps illustrating them.

ECPAD (Établissement de Communication et de Production Audiovisuelle de la Défense) is proud to take part in this exhibition by recording interviews with historians. Since 1915, this body has been in charge of the Defence Ministry's picture archives. The ECPAD now has an exceptional film and photo collection of over 12 million photos and 31,000 films. The ECPAD provides reporting teams are permanently on hand to record our armed forces' operations in real time. The teams' work is available to the media, helping to forge a better understanding of current events and to preserve the nation's memory.

The SHD (Service Historique de la Défense) collects, preserves and shares archives and works, the symbols and imagery of the Armed Forces Ministry. The Service is the main source of French military history. The SHD has lent out 20 pieces from its archives in the War Ministry, army headquarters and army units. The pieces consist of written and printed documents, maps, correspondence and official notes, showing the wide range of the SHD's archives. All the documents illustrate the intelligence missions, diplomacy and strategic reflection carried out by the military authorities in France and all over Europe.

The Centenary Mission is a Public Interest Group set up in 2012 with three main aims:

The National Office of Ex-Servicemen and War Victims is a public body under the authority of the Armed Forces Ministry. Since 1916, it has provided support to all servicemen and women, and victims of warfare.

The ONACVG has three main missions: recognition and reparations, solidarity and remembrance. It gives support to almost 3 million people from all generations who have experienced war. It also takes part in the Armed Forces Ministry's remembrance policy.

The Hauts-de-Seine department has taken part in the museum's scientific committee, has contributed to the catalogue and lent reproductions of pictures from the "Archives de la Planète" collection kept in the Albert-Kahn Museum (72,000 autochromes, 10,000 black and white photographs and 100,000 metres of films made by about a dozen cameramen in 50 different countries between 1909 and 1932. The project was launched by the humanist and banker Albert Kahn).

11 November 1918. When the Armistice was signed, cameramen from Gaumont and Pathé became witnesses to the upheavals announcing the arrival of a new world. Their film reports show the collapse of empires, ruined economies, the dawn of revolutions and the ceaseless toing-and-froing of diplomacy. They gave viewers of the popular Gaumont, Éclair-Journal and Pathé news bulletins a vision of a ravaged Europe in search of a new lease of life.

The news broadcast collections conserved by the Gaumont-Pathé Archives are a unique heritage in terms of diversity and richness. The 250,000 different items reflect all the history of the 20th century. The 35mm films have now been restored in HD. These timeless news pictures dating from 100 years ago cast a new light on the exhibition.

In 2014, INRAP (Institut de Recherches Archéologiques Préventives), a public research body, lent its support to the exhibition Napoleon and Europe.

In a dedicated museum area, the research work carried out during excavations of the mass grave in Vilnius (Lithuania) was a notable theme of the educational visit.

For the past 20 years, the Premières Armes (First Steps) cycle has given young musicians in higher education a chance to experience live performance, outside of the protected setting of a music school and in front of the regular audiences attending the 12.15 time slot in the Grand Drawing Room.

Evening concerts provide an echo to the various museum themes, with a series evoking the Winter Winds exhibitions and cycle.

Embassies provide regular financial support for the museum's music season. The embassies of South Korea, Lithuania and Switzerland, in particular, have given their patronage to a selection of concerts.

[Modified access] The access to the Museum will only be on Place Vauban, on Thursday, October 6th all day long, and on Tuesday, October 11th until 11.30 am. We apologize for the inconvenience caused.