The history of the Dôme des Invalides is closely linked to that of France: it was the church where royal mass took place during the reign of Louis XIV, then it housed the Tomb of Napoleon I in the 19th century, and provided shelter for Allied pilots in the Second World War. Learn about this place's many purposes through the centuries. 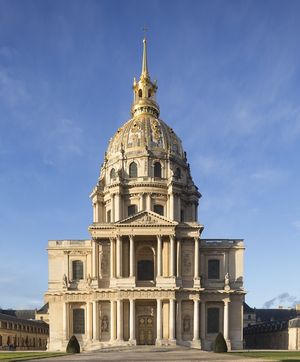 Under the authority of Louis XIV, the architect Jules Hardouin-Mansart had the Invalides' royal chapel built from 1677 onwards. The Dome was Paris' tallest building until the Eiffel Tower was erected. The many gilded decorations remind us of the Sun Kingm who issued an edict ordering the Hôtel des Invalides to be built for his army's veterans.

During the Revolution, the Dome became the temple of the god Mars. In 1800, Napoleon I decided to place Turenne's tomb there and turned the building into a pantheon of military glories.

In 1840, Napoleon had been buried on Saint Helena Island since 1821, and King Louis-Philippe decided to have his remains transferred to Les Invalides in Paris. In order to fit the imperial tomb inside the Dome, the architect Visconti carried out major excavation work. The body of the Emperor Napoleon I was finally laid to rest there on 2 April 1861. 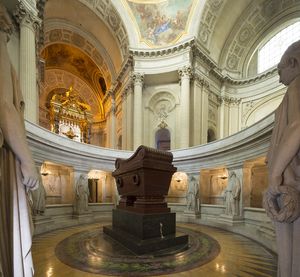 During the Second World War, the site was turned into a barracks by the occupying force, but the Morin family, who lived on the premises, secretly sheltered Allied pilots there for three years.

The Dome also houses Vauban's mausoleum, the graves of Napoleon II (also known as "The Eaglet"), Joseph and Jérôme Bonaparte, the Generals Bertrand and Duroc, and the famous Marshals Foch and Lyautey.

The programme for the 360° view of the Dome Church was produced by the Musée de l'Armée and created by Electronic Eye.