The main courtyard is the central area of the Hôtel National des Invalides site, where many events take place and a large part of the artillery and monumental sculpture collections is on display. 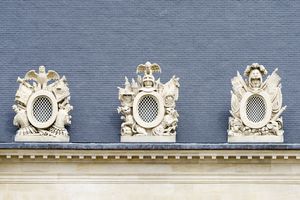 Libéral Bruant (1631-1697), dormers in the main courtyard of the Hôtel des Invalides

At 102 metres long and 64 metres wide, this is the largest courtyard at Les Invalides. An example of 17th-century classical architecture, it is enclosed by four buildings, each of which has two levels of galleries with arcades. The lavish decoration of the dormers is a break from the architectural sobriety of the façades and marks the top part of the building. The martial motifs combining symbolic figures with trophies of arms proclaim the site's military purpose.

In the middle of the south gallery stands the statue of Napoleon I, Colonel of the Chasseurs à Cheval de la Garde Impériale (the light cavalry regiment of the Imperial Guard), by Charles-Emile Seurre. After being placed at the top of the Vendôme column in 1833, it was transferred to Les Invalides in 1911. It is surrounded by mouldings of sculptures from the Arc de Triomphe du Carrousel, depicting soldiers from the Grande Armée: Cuirassier by Charles-Auguste Taunay, Dragon by Charles-Louis Corbet, Grenadier de la Ligne by Joseph Chinard and Sapeur des Grenadiers de la Garde Impériale by Augustin Dumont.

The upper gallery: a memorial trail

Accessible to the public via two staircases at the corners of the courtyard, the upper gallery offers a memorial trail with a series of plaques commemorating the combat units from various wars. 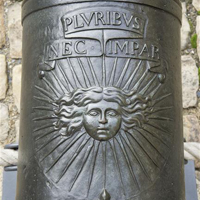 An exceptional battery of 60 classic cannon is also on display in this courtyard. It tells the 200-year story of France's land artillery and invites visitors to learn about how the equipment was made, its role, and the era of the great artillerymen. These prestigious bronze pieces are all decorated with heraldic and mythological ornamentation. From the wars of Louis XIV to the battles of the Second Empire, they remind visitors of the royal and imperial armies' victories.