A prominent sight in the Parisian landscape thanks to its famous gilded Dome, the Hôtel National des Invalides is an exceptional monument. Visitors can explore the history of France there, through the Musée de l'Armée's collections and the Tomb of Napoleon I in particular. 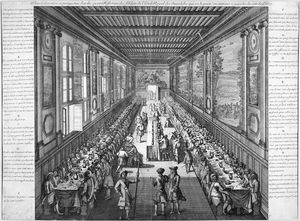 In the 17th century, Louis XIV was the head of Europe's greatest army. Aware that soldiers were the primary guardians of France's greatness, the Sun King decided to erect a building for those who had served the royal army. The Cité des Invalides first opened to veterans in 1674. At once a hospice, barracks, convent, hospital and factory, the Hôtel was a veritable city, governed by a military and religious system. Over 4,000 boarders lived within the site's walls.

A cultural city, where every visitor relives the history of France

As soon as they enter the main courtyard, visitors can admire an artillery collection charting 200 years of history. They then head for the entrances to the various museums, including the Musée de l'Armée, which boasts one of the most exceptional military history collections in Europe, or even the world.

A civic-minded city, where every citizen is at home

The Hôtel National des Invalides also embodies the emblematic values of the Republic, through ceremonies for national, civilian and military tributes, military parades and farewell ceremonies.

[Modified access] The access to the Museum will only be on Place Vauban, on Thursday, October 6th all day long, and on Tuesday, October 11th until 11.30 am. We apologize for the inconvenience caused.